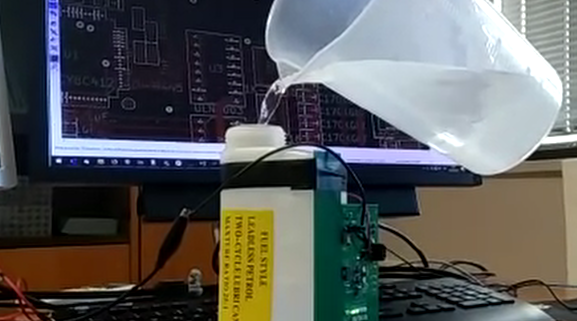 How we can check the level of water or another liquid inside the tank?

There are thousands of ready-to-use solutions available on the market, but you often find products aimed at the industrial sector, featured by high performances, but also by inaccessible costs for less critical market, as the catering world and household devices.

This article introduces 5 of the many types of level sensors

With ultrasonic sensors it is possible to measure the water level inside a tank, exploiting the capacity of this sensors to measure the distance between sensor and water surface.

Usually thess sensors are installed in the high part of the tank, in fixed position.

They consist of an emitter element that generates the ultrasonic signal and a receiver element that receives the emitted wave, something very similar to what happens in the mountains with echo.

The distance between the sensor position and water surface is proportional to the delay between emission and reception of ultrasonic waves.

With ultrasonic sensors it is possible to check with high precision the water level in real time, without any contact between sensor and water.

Reed sensors are formed by a metallic contact normally opened, situated inside a protected environment, usually formed by a glass cruet filled with inert gas.

The activation of this type of sensor occurs by means of the magnetic field generated from a magnet situated nearby.

Inside the tank that has to be monitored, a float is placed with the magnet inside: when the water level reaches the reed sensor, it is activated by the magnet.

The float is immersed in water, therefore every necessary precaution must be taken in order to satisfy the rules about alimentary use (NSF – https://www.nsf.org/).

This type of sensor allows to detect the exact condition of overflow or empty tank.

Using the weight of the water contained in the container, it is possible to activate a switch situated under the tank: this system is very cheap and it is often used for indicate when the water quantity in the tank is about to run out.

Conductivity level probes are rods made of conductive material, inserted in the tank and exploit the ionic conductivity of the water , in order to notice when the liquid has reached the probe.

We have several electronic solutions designed for level control of tanks, boilers or carbonators that involve the use of one ore more conductivity probes.

The electrical circuit is made up by the measuring electrode and by a second reference electrode: this may be another level probe, or the metal wall of the tank, solution that is usually adopted in brass boiler (or other metal alloy) present in professional coffee machines.

Using two ore more measuring electrodes, each placed at a different depth, it is possible to monitor multiple levels inside the tank.

Often, in the boilers the deeper probe is also called safety probe, because it is placed just above the level of the resistances and it is used to turn off the heating elements in conditions of lack of water, in order to avoid any damage to the resistors.

Conductivity probes are also widespread in carbonators, tanks into which CO2 is injected under pressure in order to obtain sparkling water.

Probes are necessarily in contact with the liquid, therefore they must be made with materials suitable for food use or appropriately treated (nickel plating or TEA coating).

# The evolution of control with capacitive sensors

Capacitive level sensors allow to detect the presence of water or other liquid inside the cases made up with non-conductive materials, without to get in touch with water.

It means that the case must be in plastic, such as a tank or reservoir: when this conditions exists, it is possible to adopt the capacitive technology in order to create a control system (level, overflow or empty) contactless.

Capacitive technology used to detect the presence of water is the same underlying touchscreen systems, although of course fundamentally different sensors and algorithms are used.

Placed in a fixed point outside the removable tank, such as the water tank of coffee machine, they are able to indicate to the control electronics the lack of water, even when between sensor and removable tank is present a layer of air.

In order to work at their best, capacity level sensors must be calibrated in order to suit the specific installation conditions of the particular product.

This is an operation that is normally carried out during the product development phase: the calibration parameters found are set and programmed directly at the time of production of the capacitive sensor, which at this point becomes specific for particular product.

We are developing more advanced capacitive sensors, which allow to detect not only the presence of water in a digital way (water present or absent) but also its actual level, returning an analog value  proportional to the real time quantity of the liquid.

Flexible sensors are now in phase of study, able to be adapted to curved surfaces to which to be glued on, by means of an adhesive specific for this applications.

Scroll to top
We and selected third parties use cookies or similar technologies for technical purposes and, with your consent, for other purposes as specified in the Cookie Policy. You can freely give, deny, or withdraw your consent at any time by clicking "Manage Consent" at the bottom of the page. You can consent to the use of such technologies by using the “Accept All” button or deny and close the notice by using the "Reject All" button. Settings

REJECT ALL ACCEPT ALL
Manage Consent

This website uses cookies to improve your experience while browsing the website. Of these, cookies that are categorized as necessary are stored in your browser as they are essential for the basic functionality of the website to work. We also use third party cookies that help us analyze and understand how you use this website. These cookies will be stored in your browser only with your consent. You also have the option to disable these cookies. However, disabling some of these cookies may affect your browsing experience.
Necessary Always Enabled
Necessary cookies are absolutely essential for the website to function properly. These cookies ensure basic functionalities and security features of the website, anonymously.
Analytics
Analytical cookies are used to understand how visitors interact with the website. These cookies help provide information on metrics the number of visitors, bounce rate, traffic source, etc.
Save & Accept